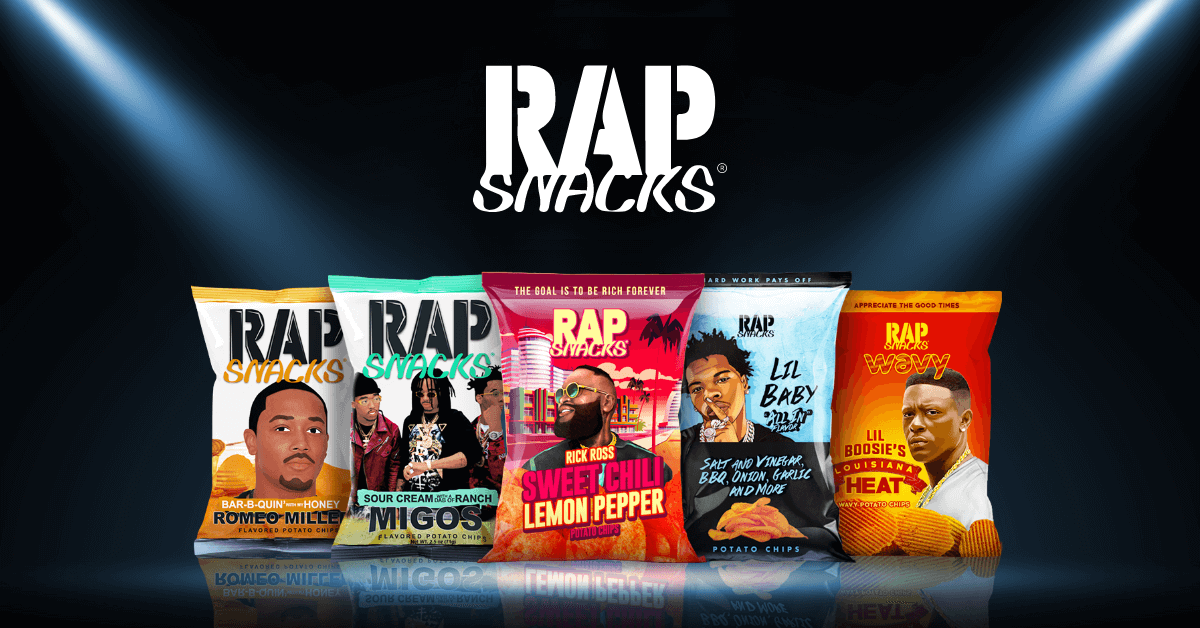 If you’re a fan of hip-hop culture, you’ve probably heard of the Rap Snacks Chips company that works with artist like Lil Baby, Rick Ross, Lil Durk, and MoneyBaggYo. While we get a chance to see these artists online – or, if we’re lucky, live in concert – there’s another medium you can spot their faces on chip bags.

Yup, you read that right. Founded in 1994, Rap Snacks is a food company that makes food products like flavoured potato chips, soft drinks, breakfast cereals and instant noodles. Unlike many major food companies, Rap Snacks has a uniquely hip-hop geared marketing strategy by featuring hip-hop artists on the packaging. This approach was the very first of its kind. Who owns Rap Snacks you may ask, CEO James Lindsay founded Rap Snacks when he noticed a “gap” in the market. Lindsay noticed that hip-hop culture was quickly transitioning from a “ethnic” market to a mainstream market. This increased popularity, combined with the lack of African-American representation on products, inspired Lindsay to create a product that “speaks to and for black culture”.

Prior to his conquest of the snack game, James Lindsay was a marketing student at Cheyney University. Once he graduated, he worked for Johnson products, an ethnic-hair company and Warner-Lambert. Having gained an understanding for packaging and logistics, Lindsay applied his newly acquired skills and understanding to starting Rap Snacks.

Lindsay’s approach towards Rap Snacks is also present in his other business ventures. In 2001, he purchased a snack foods company called “Mr.G”. Then, in 2007, him and “Queen of Soul Food” Sylvia launched Soulful Foods, Inc. Besides his own business ventures, Lindsay is also known to have assisted Philadelphia-rapper Meek Mill by guiding him to connect his brand with major companies like PUMA, Monster Energy Drink and Ciroc. It is said that this subsequent partnership between Puma and Meek Mill earned Puma a whopping 200 million dollars over a 2-year period. He eventually partnered alongside hip-hop legend Master P, who remains a limited partner of Rap Snacks to this day.

By identifying a niche market and unique approach, James Lindsay eventually secured a co-marketing agreement with Universal Records, allowing several artists under contract to collaborate with Lindsay and produce a product with Rap Snacks. While many celebrity-affiliated products are often marked-up, Rap Snacks were [at one point] incredibly affordable 25-cent bags of chips. By branding the bags with hip-hop heroes, Rap Snacks was able to do two things simultaneously: 1) appeal to hip-hop fans by presenting a product which their favourite artists, and 2) allowing African-Americans to see themselves in a product which they consume.

Let’s not act like other companies haven’t tried this before. We’ve seen companies like KFC, McDonalds and Burger King partner with hip-hop artists in an attempt to better connect with “urban audiences”. While these attempts may (or may not) have been successful, their lack of authenticity tended to reveal itself in one way or another. The difference between Rap Snacks and many other major food companies is in the cultural foundations of the brand itself. Rap Snacks seems to be from within the culture, approaching their marketing from an insider-looking-out perspective. For other major companies, it is generally the opposite: they are from outside the culture attempting to look inside.

This is how many major brands often get it wrong. A historical incidence that sheds light on this comes from that KFC commercial with MC Hammer in 1992. While the video displayed Hammer’s “moves”, it ended with him dancing and throwing a piece of fried chicken in the air. Many individuals across America loved the commercial, but those native to the Hip-hop culture felt like it was in poor taste and was yet another display of both racial and financial exploitation of major companies towards the black community. As much as companies may delegate more culturally sensitive material to “a designated team”, oftentimes their hip-hop marketing strategy falls short and does not resonate with real hip-hop consumers.

Rap Snacks has flipped this reality by being of the culture and for the culture. This approach benefits every major player in the process – from the consumer to the actual artists on the products themselves. Currently, Rap Snacks has approximately 13 types of chips, including “Lil Durk Buttermilk Ranch”, “Master P Honey BBQ”, and “O.G Bar-B-Que Cheddar Snoop Dogg”. Individuals can order 6 bags for about $28.00, or 36 bags for $58.00 (on sale). The most intriguing aspect of rap snacks is the actual flavours of each chip. With all the variety and the small portion sizes, individuals can try several different flavours and assess which one is their favourite. This adds an almost “competitive” element to the products, allowing consumers to enjoy trying them and building a cultural aspect around flavour preferences: “My favourite is the Rick Ross one”, “No, have you tried the MoneyBaggYo Dill Pickle? They’re the best ones!”

Lastly on the product line (besides the 4 Rap Snack hoodies available under the “Merch” section) are a cultural staple: Instant Ramen Noodles. The 3 featured flavours of Ramen Noodles are: 1) Louisiana Hot & Spicy Chicken (Boosie), 2) Creamy Chicken Gumbo (Master P) and 3) Beef Prime Rib (E-40). Each order comes with 12×2.25 oz Instant Ramen Noodles for $32.99, which comes to a little less than $3 a box. For many individuals (including myself) instant ramen noodles were one of the few meals I could fully prepare by myself with relative ease. Nothing tastes like home alone or self-sufficient more than some instant noodles.

So what’s next for Rap Snacks? They’ve already found a way to get their product to big box retailers like Walmart, Fortinos, and Metro. It seems like, from a cultural perspective, they are both relevant and at the forefront. Rap Snacks has also reached a golden balance between paying homage to the legends of the game (Snoop, Master P, Biggie) as well as allowing for the representation of the more contemporary wave of hip hop (MoneyBaggYo, Lil Baby, Lil Durk). As it stands, there seems to be one more modern frontier left for Rap Snacks, and that’s to have more female hip-hop artists represented by the company.

On June 30th, it was announced that Nicki Minaj would be releasing her collaboration with Rap Snacks. Nicki Minaj was set to become only the second female on the Rap Snacks catalogue – after Cardi B – with her flavour of chip being dubbed “Barbie-Que Honey Truffle”, an ode to the Nicki Minaj fanbase who refer to themselves as “Barbies” or “Barbz” for short. CEO James Lindsay acknowledged the massive role Nicki Minaj plays in hip-hop and being a “disruptive force” in the industry – similar to the immediate impact Rap Snacks had on the snack industry.

However, in the middle of August 2022, it was reported that multi-billion dollar company Mattel – responsible for inventing the Barbie Doll – was suing Rap Snacks for their use of the word “Barbie” in their product. This is not unlike Mattel, who also sued European pop group “Aqua” for their use of the word Barbie in the song Barbie Girl. They later lost the case 2 years later. While Nicki Minaj is not included in this lawsuit, Rap Snacks’ use of the word “Barbie” without sought permission has led Mattel to seek damages and to cease using their name in the product. Since then, the Nicki Minaj “Barbie-Que Honey Truffle” chips have not been released. Despite this, Lindsay has still been posting pictures of the Nicki Minaj Rap Snack pack on his Instagram.

Rap Snacks is also home to a program called “BossUp”, which is an entrepreneurial program for kids ages 6-17.  This program is designed to help the youth develop and build business skills whilst raising money for their community. The program is organized into three phases: 1) Plan, 2) Sell and 3) Deliver. When an individual signs up to be a part of this program, they are given 12 bags of chips, 24 bottles of lemonade, downloadable sales sheets and access to exclusive Rap Snacks business content. This program also includes quarterly invitations to members-only workshops.

By providing their products to promote entrepreneurship within their community, Rap Snacks has found a way to market, advertise, and lead with purpose. By giving the youth an opportunity to make something out of themselves, Rap Snacks produces a realistic hope for individuals that they too can dive into business ventures and reap success. Through representation and accessibility, individuals can visualize themselves as the next James Lindsay, or the founder of the next Rap Snacks. This type of presence for a company is very useful and impactful, and allows the brand to grow in ways that simultaneously help individuals grow as well.

The expansion possibilities for Rap Snacks are endless – as their never seems to be a shortage of rappers out there. However, for the first time, Rap Snacks will collaborate with a hip-hop artist outside the United States. In March of 2022, it was announced that UK artist Digga D was set to feature on Rap Snacks. CEO James Lindsay posted a photo on his Instagram of the two, saying:

“@pyr3xliving will our first artist on our @officialrapsnacks 🇬🇧bags. United Kingdom Rap Snacks are on the way. This dude is a flat out a star. Remember you heard it for me first.”

Both Lindsay and the team at Rap Snacks seems to constantly seek to innovate and grow the brand. The Instagram page that they have is filled with hip-hop news, new music, historical information on black entrepreneurship, podcast clips and more. The diverse range of information gives Rap Snacks a more holistic brand image – as opposed to being one-track minded and solely posting images and advertisements of products. The impact of their brand cannot be understated, from both a hip-hop perspective and a snack-industry perspective. On March 3rd, it was announced that snack-giants Lays were releasing an exclusive, limited-edition cheddar jalapeno flavoured collaboration with soccer star Lionel Messi called G.O.A.T. As one can see, the aesthetic of the actual chips bag seems to strongly resemble some of the “icon” chips that Rap Snacks has released. In response to this, Master P made an Instagram video calling out Lays for running out of ideas and having to duplicate their ideas because they’re “scared”.

“Y’all scared, I know you’re scared. You have thousands of marketing teams, and you still do nothing but try and duplicate us? It’s gonna be us against y’all man.” – Master P

The use of celebrity endorsement to promote brands is ubiquitous. It’s one of the reasons celebrities even exist and are able to make a living. While many celebrities end up collaborating with major companies, they often fall short and are in a compromised position. To combat this, many celebrities try to start their own brands. However, without the expertise and access to resources and individual talent, it can often be intimidating and take a long time to establish legitimacy. However, partnering up with a company like Rap Snacks allows for both the artist and the consumer to be equally satisfied. The lack of exploitation commonly seen in business partnerships with celebrities – as well as the cultural presence of the products themselves – allow Rap Snacks to hold a special and unique seat in the minds of consumers alike. Individuals are far more likely to trust things which they can relate to, and it seems like Rap Snacks – from a grassroots perspective – is very relatable to the average hip-hop head. As Rap Snacks continues to grow, so will the number of collaborations with figures of the hip-hop community. Rap Snacks presents the simultaneous promotion of hip-hop culture and flavourful snacks.