The music video “P2P” starring Bizz Loc was officially premiered on 2nd April 2021, gathering about 7k views in only a week!

The video starts off with footage of the Toronto police twisting Bizz’s hands as he is already handcuffed and screaming in pain. It managed to perfectly picture racism against black men and women in the western world. The video tried to shed light on the George Floyd murder case and the Black Lives Matter movement. It also includes footages of policemen specifically stereotyping and targeting the black race.

In any case, Bizz Loc’s music is more than anecdotes about discrimination against the dark race. They’re conveyed in the sort of rough, dry voice you may have subsequent to awakening with a headache, laid over solid beats that could be profound cuts on a late-&apos;90s No Limit tape.

The thumps and drums add elements to the song into a delightful form, emphasized by rattles, clatters, flickers, and sparkles of sound. The beat reaches as far down as possible and glitches, obscures all through the center, yet these changing surfaces and consistent adjustments keep it new; its groove stays.

Bizz Loc began rapping in 2004 for the most part for entertainment only, the fame he got made him take up singing as a serious career.  He, thereby, produced “Promotion” and “Take a gander at me” remixes, collected more consideration with every video dropped, yet it wasn’t until the release of “ErrrGod” that people truly started to pay heed that there was another voice of the roads that should have been heard, and after the debut of “Darkside” and “Set Trippin remix” recordings, Bizz has acquired himself the title as one of the practical “next ups” emerging from Toronto. While still in jail, Bizz Loc managed to spread his influence using music as a medium.

With this song, he has pushed some creative boundaries by representing the black race in a new light. 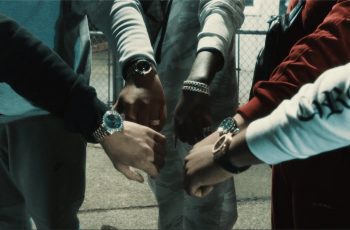