Why G drops new video for the song Walk With Me

Why G delighted the crowd and released his new single a few days ago, the premiere of the official video for the song Walk With Me was on August 9, 2022. The song received many good comments from the audience in a short time, and so far, this video has been watched by over 23 thousand people. The visual is featured on Why G’s official YouTube channel, which has over 15k subscribers. Why G made an exciting song that you will surely like.

The rapper recorded his new video in a beautiful location in a botanical park. Surrounded by beautiful flowers and greenery, the rapper enjoyed the beat of his music. The location for this visual surprised fans, and we don’t often get to see this kind of visual presentation concept.

The music of Walk With Me is a perfect beat that creates excellent vibes. Why G has a distinctive voice, which combines well with his freestyle rapping and elements of hip hop, the song’s melody is easy to remember because it repeats almost the entire song, so after the first listen, you will memorize parts of Why G’s new song. 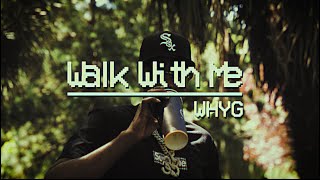 Why G – Walk With Me

The song Walk With Me is becoming increasingly popular, so the number of views on Spotify is approaching the number of views on YouTube. G has a lot of audience on this platform, so his monthly score is over 90 thousand listeners. His songs on the Spotify platform have millions of views, and this talented artist can freely boast of great success.

For the last few months, the rapper has been very active in promoting his new projects. In addition to the great song Walk With Me, the rapper also released a visual for the song Making No Cents. This visual was published a month ago, and in this short period, the video was viewed by over 77 thousand people. The song Neataz, which was on his last album, also turned out great.

Five months ago, Why G released his latest album, Cronem. This album is specific in that all the songs were great collaborations with other artists. The song that stood out on the rapper’s album has Died With A 30, which he did in collaboration with Top5 and Bulldog. In just a few months, the song has over 96,000 views.

G’s popularity is also growing on Instagram, where over 101 thousand people follow this great rapper; on the rapper’s profile, you can see a lot of updated content related to his projects and numerous photos from his private life. Follow his profile and enjoy his exciting content.

In case you haven’t seen the new visual – click the link below and check out Why G’s new song Walk With Me. Tell us in the comments how you like this interesting visual and whether you have listened to the songs from the last album.

In the end, read part of the song text:

I’m getting it in, run it up fast tryna catch me a M
This gun so thick, If this bitch hit
I bet his chances gon be real slim
I bet this five seven take off a limb

Pvrx – Even When I’m Dolo